Instructor for MSV since 2011 - at Brands Hatch on Race, Rally and Trackdays.

2015 Porsche Mobil 1 Supercup round at the British Grand Prix.

Raced in BTCC in 2013 for Addison Lee Motorsbase at Croft in their Ford Focus ST , taking a debut Victory in the Jack Sears Trophy for S2000 cars. Also raced in the final BTCC race at Brands GP, taking points in all three races in the Exocet Racing Audi A4 NGTC Car.

Progressed to the Michelin Ginetta GT Supercup in 2011 - taking 17 Podiums, 4 Wins, 4 Poles and Fastest Laps in a Ginetta G50, then in 2012 moved up to a Ginetta G55 taking Victory at Snetterton and a total of 6 Podiums.

Since 2010 have been a BRDC Rising Star. 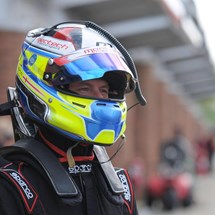